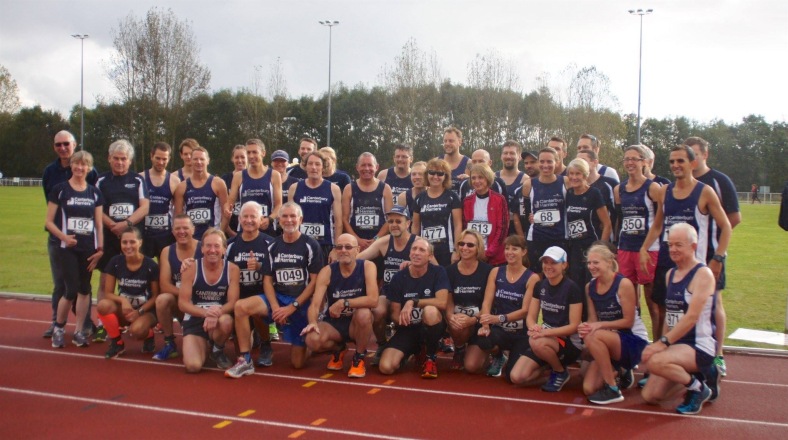 As some of you may be aware I am currently nursing an Achilles injury.  I had signed up a few months ago to the Givaudan Ashford 10k on Sunday 9th October as it was my running club (Canterbury Harriers) Club Championships and I was sorting this out for the club. Due to my minor problem I was advised by my phsyio not to race Sunday and run round with my wife. At first I was a bit disappointed but I knew that was best for me as I have only been doing easy training. My wife liked the idea of me running with her and pace her to a PB.  We never run together so I thought it would be nice.

It was the 30 year anniversary of this race with record numbers; this is the biggest 10k in Kent and attracts around one thousand runners. I do recommend this race as it is all on closed roads and you get a nice finish inside the Julia Rose Stadium.

The day came for the race and I was very tempted to race because I had a chance to place highly in the club championships. Despite the wet conditions there was a record turnout of 48  Harriers – the biggest number of Harriers in any race since the club`s formation in 1993. That felt good as I really tried to get a lot of Harriers to do it. I decided to wear my GB tracksuit to the race and make use of it. I did feel a little uncomfortable when I first got there as quite a few people were staring and pointing at me. I also found it weird turning up to a race at the Julia Rose Stadium because that is where I train on a weekly basis after work.

So I warmed up on with a couple of Harriers and I knew that it would be a different experience running a race at a much slower pace. It was chucking it down, so I stood at the start line with my wife and when it was time to start I let my wife go in front and I tucked in just behind her as I didn’t want to put her off.  Due to where I was running I heard lots of people talking to themselves. For example one lady stressed she had gone out too fast to herself. I suddenly found myself in the way of other runners so I moved to the right to allow people to pass me. I let my wife run the first mile without any advice and after one mile I started to tell her what to do and what pace to stick to.  It was nice to see lots of runners I knew and this time I was able to cheer them on.

The rain kept coming down and I was freezing; I thanked some of the marshals on the route. I was still tempted to run fast and it was just a weird feeling to be where I was but it was also fun. At certain parts of the course I was helping my wife by encouraging and telling her what to do; when we came up to inclines I would say to her attack the hill you can recover in the down hill section. When we came down to the last 400m I said to her its up to you what you want to do and she sprinted for 200m then eased off then sprinted again the last 100m, overtaking people at the end. I know she likes a sprint!  Well she left me behind in the sprint and she finished in 47:22, taking a huge chunk off her last PB in May 2016. I was very proud and happy for her, I really enjoyed running a race with a different point of view.

One thought on “Givaudan Ashford 10k running with a different experience”